The Emoji Movie follows the story of the secret world within your smart phone. Emoji’s live to serve their phone’s owner by relaying their Emoji face to the owner's screen, in this case young teenage boy Alex’s phone, and all the Emoji’s live in Textopolis. Each Emoji is supposed to only have their one expression except for Gene (T.J. Miller) who has a ‘defect’ that enables him to express different Emoji expressions instead of just his Meh expression. When Gene messes up his first day on the job and can’t pull off his Meh expression, he seeks to become normal with help from his friend Hi-5 (James Corden).

Hi-5 leads him to hacker Jailbreak (Anna Faris) who helps to change Gene’s coding and make him a pure Meh Emoji by going to the cloud. Together, Gene, High-5, and Jailbreak go on an app-venture to YouTube, Instagram, Candy Crush, Twitter, Just Dance, Spotify and much more. To add to the supposed drama Gene and friends are being pursued by Smiler (Maya Rudolph) who is in leads   Textopolis. Smiler seeks to delete Gene with her evil robot minions. Alex sends his phone to the phone shop for software deletion which will take place within four hours as he thinks it is faulty due to Gene’s failed Emoji face. In addition to the previously mentioned Alex is trying to impress a girl at his school but can’t seem to get it right due to being unable to find the right Emoji to impress her, yes someone was genuinely paid to write this plot! 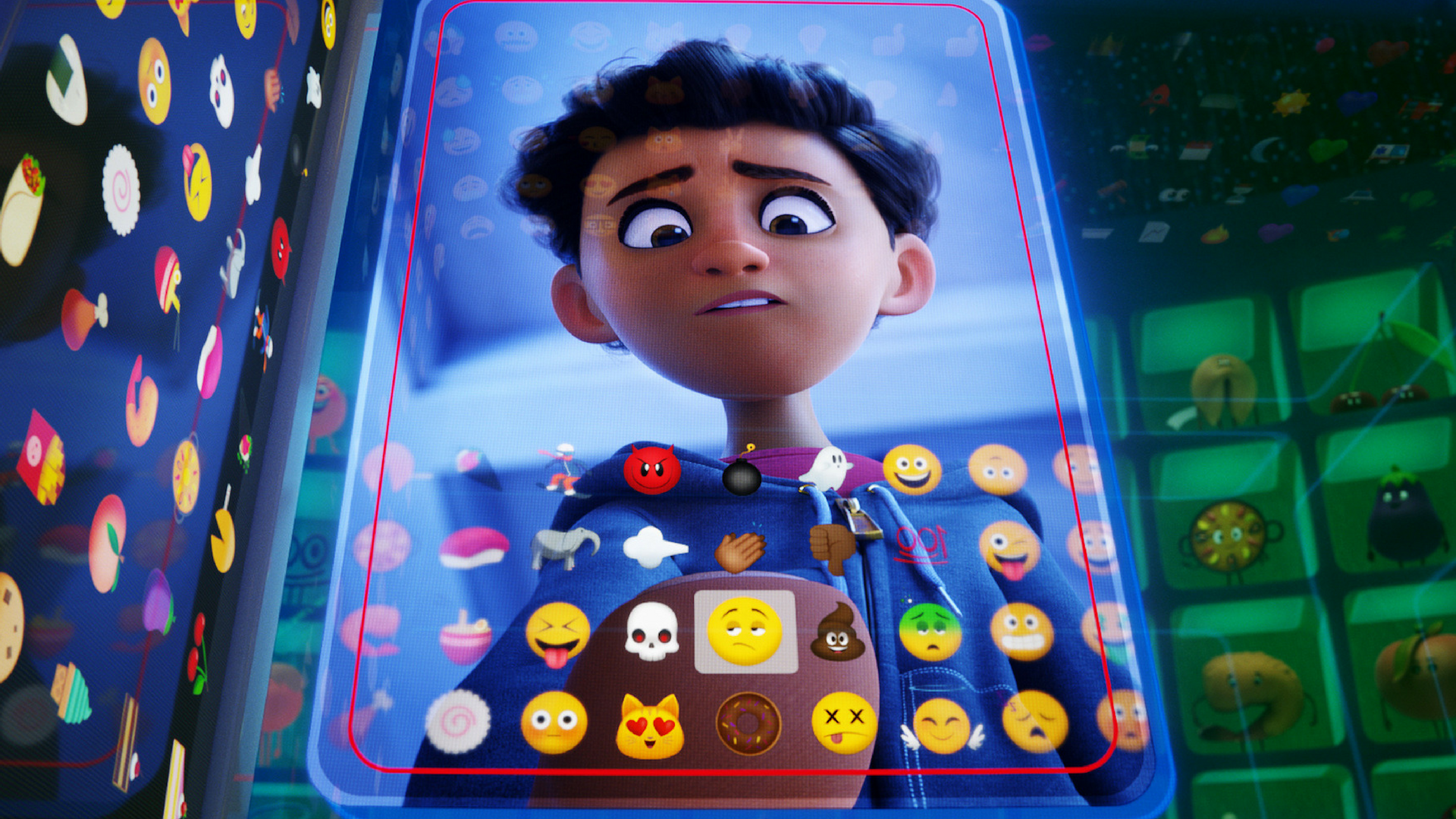 The story behind how the idea for The Emoji Movie came to exist is far more intriguing than the actual film. Sony won the rights to this film in a bidding war against two other companies, seven figure bids involved apparently, after which the three writers at Sony realised they actually had to think of and find a way to write a plot out of Emojis! As source material this is a struggle for anyone to work with, I’m amazed they could get anything out of this steaming piece of poop! In all fairness to the film, the animation is well done considering what a low budget the film had for an animation ($50m)! They managed to acquire a strong cast of actors which helps prop up the film including stars such as T.J Miller, James Corden, Anna Faris, Maya Rudolph, Steven Wright, Jennifer Coolidge and Sir Patrick Stewart. They were so proud of having Patrick Stewart; all credits and promotional material included the ‘Sir’, but more on that later. Seriously, dang! What a waste of talent!

I honestly don’t think I’ve face palmed so many times in one film ever in a cinema. I was sat in the cinema screening room with five other people. Of the five people there other than myself I heard one chuckle at a single point during the screening and total silence the rest. For a film that describes itself as a comedy, there was such little comedic content within the film. I genuinely think I gave a slight chuckle at maybe two jokes; one about emoticons being elderly and a scene involving internet trolls literally being trolls. In addition to this there is an inappropriate joke for children at the end of the Candy Crush scene that involves the imagined death of a character, which as a consequence results in Gene exploding. The film has no idea of what it wants to be and just knows we expect good messages in family films. As a result, the writers decided just to rip ideas left right, and centre from family flicks that are far superior in the way they are written, the messages they convey and feature true comedic elements such The LEGO Movie, Wreck-It Ralph and Inside Out. Sony, however, fails even to give a meaningful message to children. The Emoji Movie attempts to portray that it is okay to be different and embrace a world full of different expressions, this particular message I don’t disagree with. However Jailbreak is discovered to be the Princess Emoji and in one scene Hi-5 asks if she can call birds by whistling like in Disney cartoons of old. Jailbreak makes this big speech that in summary states she is not a stereotypical princess, will not conform, and is a strong independent woman who doesn’t need to fall into that category. Less than five minutes later she does exactly what she said she wouldn’t, and behaves in a stereotypical way by whistling like a princess. A very Confusing, messy and incoherent message for children. Plus why is such a forced random moment like that even necessary? It adds nothing of value and they contradict it anyway.

Now let’s talk about Poop. They got Sir Patrick Stuart to play the Poop Emoji. Well done Sony! He has approximately two minutes of screen time at most in an 86 minute movie! Patrick Stewart has said in interviews that he was simply hired because it was a joke that they could have a classically trained and well-known actor play such a low role. Simply a pay cheque for Stewart, but I do feel sorry for him; it is a joke that was not worth having on his film credits! Plus of course, there’s a Star Trek reference and joke when the headquarters of Textopolis is getting destroyed, and the Poop Emoji sits in a captain chair and says “we have a problem”. 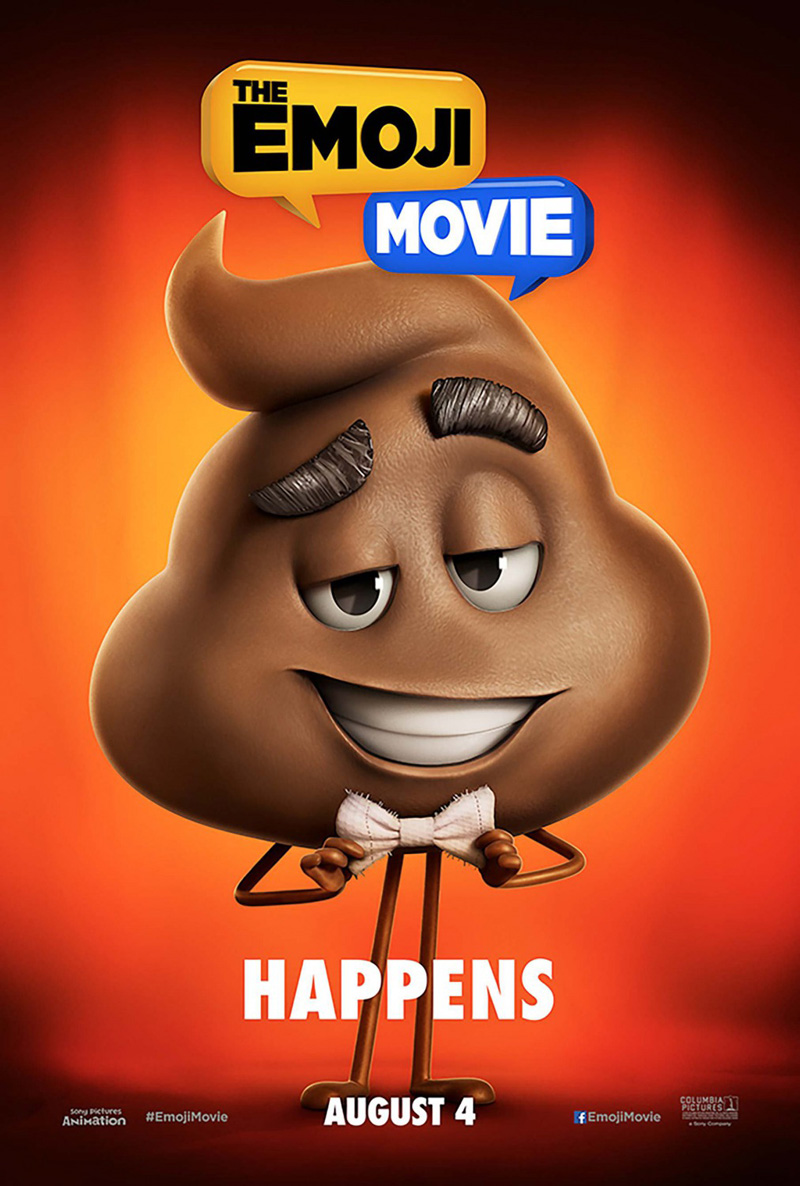 I also need to talk about the obnoxious and horrifically forced product placement the entire film. This is a family film that young impressionable kids are going to see and the film is trying to heavy handily sell apps! I am more than aware of product placement in other films, but at least in most cases, there is some degree of subtlety or logic to its presence in the environment like Coca-Cola in a restaurant. With this film, it constantly mentions the blatant product placements and even hinges entire sections of the plot on it. It’s so obvious and disqusting that Sony is pushing this so hard on impressionable children. 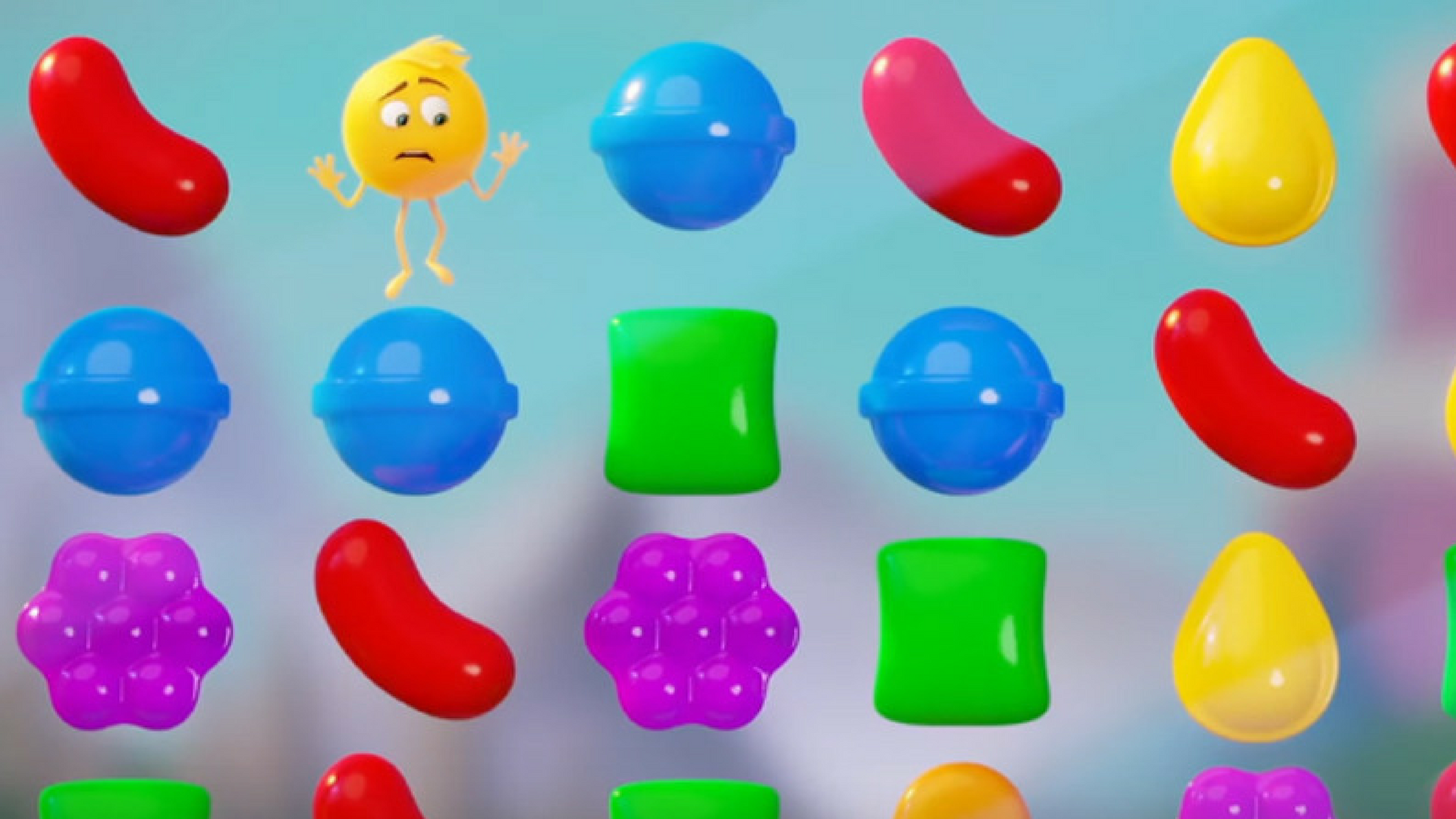 In addition to the heavily forced product placements the film as a whole has some questionable underlying themes. In the opening scene the film encourages expression via Emojis exclusively to the detriment of the use of written and verbal language, and other forms of expression. For a film that claims to be about inclusiveness, acceptance and freedom of expression, regardless of what form it takes it fails catastrophically. It clearly shows to children that Emojis are the form of communication to conform to and these simplified, boiled down expressions trump all other methods of communicating even if other methods might better suit the individual and the situation in which it is being used. This is already a problem with people glued to their phones and opting to express via micro-content, such as Vines and memes that loose all value via their very robotic and oversimplified nature. Sony should feel ashamed. The film lacks integrity and artistic value. I’m completely disgusted, bored and downright insulted by this film.

This is, hands down, the worst film of the year so far and I highly doubt this train wreck will be surpassed! Such a shame as I full well know this will makes its money back where as animation films like Kubo & The Two Strings from last year is a film of such artist expression and has an important message to share but got ignored completely at the cinema! Don’t watch The Emoji Movie, it is utter garbage pure and simple. Shame on you, Sony! Scoring this 5/100 (5%). 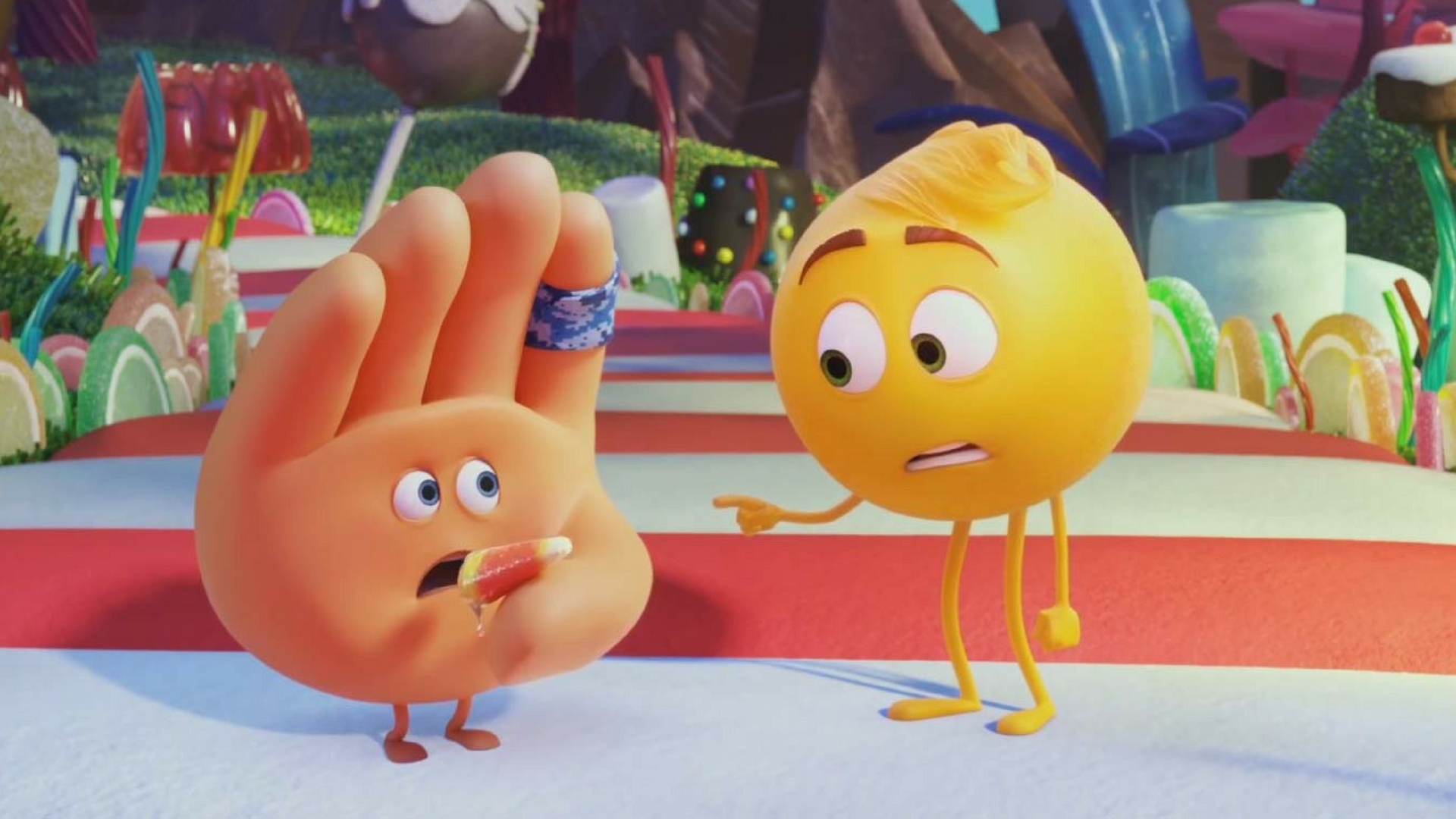